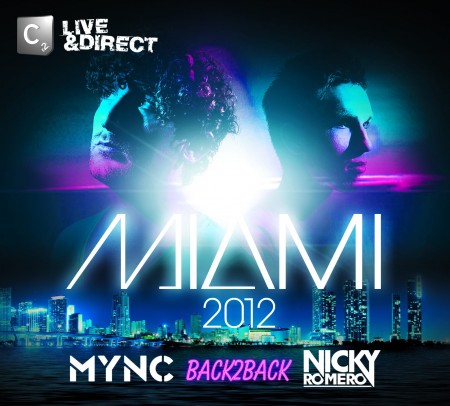 Cr2 Records are excited to announce news of their 2012 Miami WMC Compilation release. Since 2007, Cr2 Live & Direct compilations have been showcasing the most cutting edge house music from some of the world’s leading DJ/Producers. This year Cr2 pull out all the stops and bring together two heavyweight names to come ‘Back 2 Back’ to mix up a selection of some of the current big-room club sounds rocking clubs around the world as well as showcasing over 15 brand new, unreleased tracks including a brand new exclusive track by Nicky Romero titled ‘Se7en’.

MYNC
This dynamic duo led by front-man and owner of Cr2 Records, Mark Brown, have been in unstoppable form of late. There is no doubt that 2011 ended on a high, with heavyweight remixes for Avicii, Jason Derulo, ATB and Azari & III. 2012 looks certain to continue in the same vain, with their latest remix having just been accepted for the new K-Naan Feat Nelly Furtado single. In the clubs MYNC have continued maintaining that fine balance between commercial and underground with a string of driving tech house releases that have been damaging dance floors across the globe. They have just completed tour's of Brazil & Australia which included playing at the prestigious Green Valley.

NICKY ROMERO
It would be hard for anybody to argue with the phenomenal rise to success that saw Nicky Romero become one of the world's most in-demand DJ / Producers in 2011. David Guetta was quick to spot this incredible talent, inviting Nicky to remix his single with Usher, as well as the number 1 hit 'Titanium' Feat. Sia. Nicky's production skills are second to none, and his recent hits 'Camorra' 'Toulouse' and 'Generation 303' - which was signed to Tiesto's Musical Freedom label, has catapulted Nicky into the A-list of dance music producers for 2012. He has just begun his DJ residency at Marquee in Las Vegas as well as being asked to remix Madonna.

Check out this promo player for the new MYNC & Nicky Romero

Not only can you sample the entire compilation, but you can share this with your readers, too!